This top 100 list has been created to celebrate and honor the best or most remarkable audio amplifier designs of the past.

I have made the 100 amplifier list with a little help of the highly skilled and knowledged members of the “Sound Practice” magazine forum “Soundlist” aka “The Joe List” and participants of the European Triode Festival. I asked them to suggest amplifiers they felt should be on a list of the 100 best or most interesting audio power amplifiers.

Many of the amps illustrated here are obvious to be on such list….Other perhaps not. I have listed all the amplifiers suggested by the sound list group with the name of the person suggesting that specific amplifier. The remaining are all of my choice, but some so obvious that they was kind of suggesting themselves.

I have not personally heard all the amplifiers in this compendium. In fact I only point to strengths and weaknesses in the various designs. It is possible to make a very good amplifier using mediocre parts – if the basic circuit is good. It is however, NOT possible to make good amplifiers with the best possible components, if the circuit is poor to begin with. Certainly the optimal approach is the  best possible circuit and as good components money can buy. There is no such thing as the optimal circuit – it all depends upon too many variable and the compromises that needs to be met. Good engineering is to get the best possible with the cards at hand. Much can be learned by studying these old circuits. Keep in mind that most of them are based upon a richness of experience and collected accumulated know how.

I have chosen to list the amplifiers in a  chronologic alike order rather than by output tubes, design topology, number of stages, phase splitters, feedback method, output
transformer coupling or so.
The reasons that I do not want to study vintage pre-amplifiers is the simple that most of these made before the 1970’s were very poor, in my opinion. Too much gain and thereby noise, distortion and restricted headroom. 99% of the vintage RIAA circuits are pretty poor as well.

The signal sources we use today operates at line levels. ( 1 – 3 V RMS ) These are CD, DVD, Blu Ray, SACD, DVD-audio, computers and tuners. For domestic use it is only vinyl Pick Up’s that needs dedicated amplifiers  ( of proper quality ) in order for the signal to be  brought up to line levels. Hence there is no  need for poor or mediocre high gain pre-amplifiers anymore. Modern pre amplifiers need only to handle line level. In fact not even a line amplifier is needed if cables are held to reasonable lengths. Power amplifiers ought to be able to handle any of the mentioned signal sources for full output. Certainly in that case a level adjustment of some sort are needed. The sensitivity of a modern power amplifier for full output, should be  1 – 3 VRMS.

One of the best known giants of audio in the past was Western Electric – a division under AT&T. So was Bell Labs, Langevin, London Electric, Northern Electric, Grayburn, Weston,  Westrex, Altec and a number of other companies.

The early need for audio amplifiers were due to telephone communications. Only later it expanded into home radio, cinema and reproduction of music recordings.

All these companies as a collected whole was the masters behind milestone after milestone after milestone.
Being that microphones, speakers, tubes or amplifier technology. Before WW2, the AT&T, Bell Lab were second to
none. Best known these days are of course Western Electric and Altec Lansing.
As Joe Roberts ( Sound Practices ) says: “WE pretty much covered it all….”

W.E. often used the output tube types as rectifiers too in the early days.
Probably with maintenance and service in mind. ( Boy – Who would want to use a NOS 205D’s or 300A’s as rectifiers today ? – goose skin raises in the Joe community)
A lot of iron ( Transformers ) went into the early designs.
WE often used input and interstage transformer, but did not always used these transformers as phase inverters. Possible due to the variation of winding technique/machines at the time.
In my humble opinion the best phase splitters are transformer based or the split load concertina.
( In that order if well designed )
WE used advanced steels very early on and their winding technique were some of the best at the time.
These guys, upon which shoulders we all stand – did good, didn’t they ?
Hats of to Western Electric…again and again….

Now, we may be lead to think that  Western Electric and affiliated were the only ones contributing to the developments in audio. Of course it was not so, not at all, but a number of factors seems to have fainted Europe from the map of audio history. Firstly the American companies had a huge home market to supply. European companies would mainly deliver to their own individual home markets. This meant that the sheer number of  items to survive to present days, is much much less in Europe. The war in Europe 1939-45 meant further destruction and the lack of materials following after WW2, meant that the major parts of components were recycled and other vice put into reuse when possible. The reconstruction of Europe and the modernization that followed meant that what was left from the past would in general be replaced by new items.and even schematics and datasheets for the former technology were no longer needed. Most were dumped from the archives. Today it is very difficult to find vintage European amplifiers, even schematics of such older than the 1970’s are often hard to come by. In USA churches, small studios, theaters and cinemas kept the stuff going, to such a content, that we even to this day, from time to time find old Altec’s and similar equipment in use.

In Germany it was companies such as Telefunken, AEG, Siemens, Klangfilm, Studio, TeKaDe ; Neumann etc. that lead the way.

In England we would have to mention, Mullard, Marconi, Osram ( MO-valve ), GEC, Parmeco , LEAK , QUAD, Vitavox and many others.

Similar companies existed in French, Italy and so on.

In my part of the world – Denmark, we had pioneers such as Valdemar Poulsen ( Radio ) , Jensen (  emigrated to USA and founded Jensen Speakers ) and companies like Bruël & Kjær, Ortofon, BoFa ( B&o ) , Lyrec  etc.

Philips from Nederland was all over the place ( Mullard UK, Sylvania US ).

Many more could be mentioned, but this article is with regard to Power Amplifiers, not history as such.
Most of the amplifiers we at Soundlist find interesting and worthy candidates as milestones in audio power amplifiers are based upon rather few main circuits.
The various Williamson designs are by far the most used in the top 100 amps suggested by the Soundlist Joes. The fact is that the majority of vintage valve amplifiers are based upon this circuit. 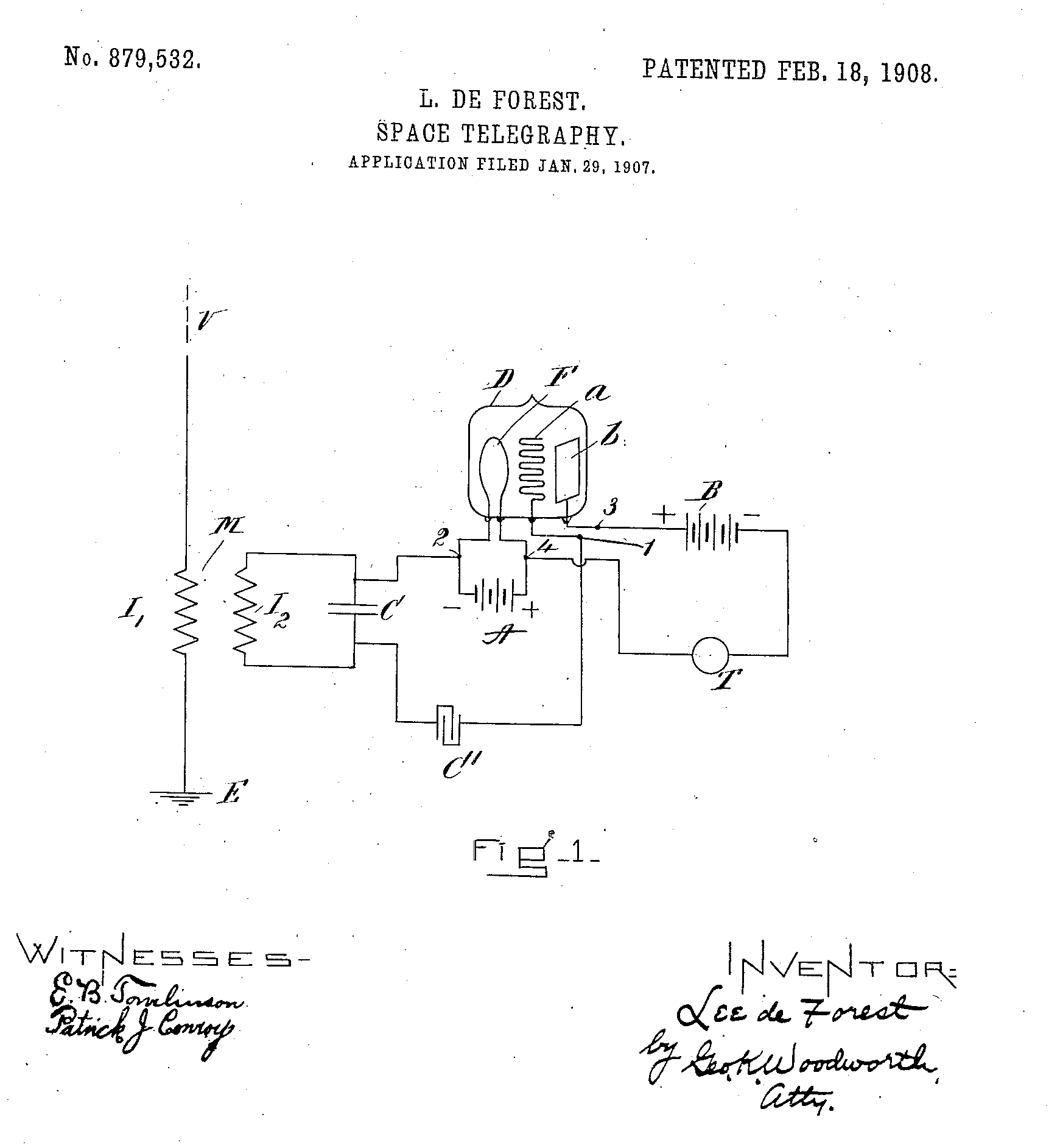 It is often claimed that the world’s first active electronic amplifier was a design made by Lee Deforest better known as ”The Audion”. In fact DeForest called all his early valves for Audion’s. The T in the schematic means Telephone speaker, the two C’s are capacitors. Note that the grid is floating with no DC potential.

The Audion circuit did not do much good, as Deforest had
yet to understand the fundamental characteristics of vacuum tubes. (
Valves to us English speaking Europeans )
In fact it is rather a kind of rectified modulator detector – all though amplification did take place. It is questioned how much Deforest actually invented and how much he copied from others. Forest spent fortunes on ever going court disputes with Fleming, Armstrong and countless others.

Deforest later wrote a book , declaring “Deforest , the father of radio”….Perhaps Deforest had never heard of Marconi and all the other genius minds.

The early tube symbol appears as such as it was the belief of Deforest that the grid should be placed besides the two other electrodes in order to accomplish what he called the ion effect. Deforest claimed that the tube had to be filed with gas in order to work.

All though the 1906-7 circuit hardly did anything, it was kind of an audio amplifier and Deforest was the first to apply for a patent with a three electrode tube.
Despite the poor quality and the fact that the inventor did not know how and why the circuit did what it did –  this is officially amplifier number one…

The first of its breed. 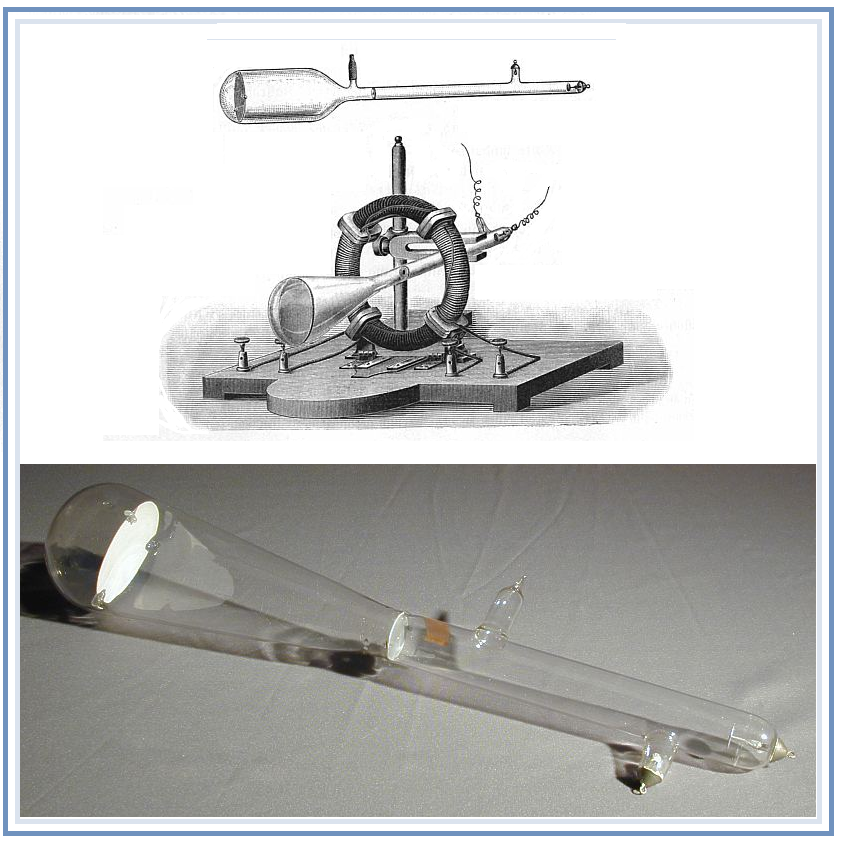 Is this the worlds first triode ?

Ferdinand Braun invented the cathode ray tube in 1897., during his research and investigations of oscillation.  The oscillograph above consists of an anode and a cathode. The electrode that performs like a  grid is the twin coil toroid that was placed outside the glass envelope. This is indeed a total of three electrodes ( = triode )

Amplification, however,  is not possible with a cathode ray tube. Maybe this is why Braun is not usually mention as a tube/valve pioneer ? . Braun belonged to the Immanuel Kant school of philosophy and he never claimed a patent for the oscilloscope as he considered it to belong to mankind. Braun claimed that wars would never happen between civilized democratic nations. He left Germany shortly before WW1 and never returned. Braun also played a significant role in the development of wireless telegraphy.

Source: Annalen: Physik und Chemie, N.F. 1897.
The tube was sold for laboratory use to universities and such by: Müller-Uri, Braunschweig, Germany.

Armstrong , USA,  got a lot closer to how the triode worked and made a much better amplifier in 1913. Vacuum inside the glass envelope turned out to be a lot better than gas. Armstrong also made a simple circuit with variable grid Voltage in order to obtain the characteristic curves of triodes. Armstrong invented the Superheterodyne and FM-modulation. The schematic above are perhaps from 1915 ( My note ) , but I had at one time a schematic dating from 1913 by Armstrong that I seems to have lost. Anyway Armstrong was a very early bird and he was much more innovative than Deforest, but he did not have a big corporation to back him up.

Hats of to Armstrong….

It is indeed impossible to declare who invented the active tube/valve. At the time we find some 2-300 patents claims from all over the planet to choose between, but mainly UK, USA, Deutschland and French.

Whom made the first amplifier ? Was it Fleming, Deforest, Armstrong, Marconi or……?

The deeper I got into this , the more complicated it got.

Was is actually the German, Fritz Lowenstein, who applied for his “C-Bias” patent in 1912, that invented the first amplifier ?  At least he solved the mysterious control of the grid by applying negative bias.

To add another candidate as early as 1914 , Eric Magnus Campbell  ( Finland ) applied a patent for a telephone amplifier in Germany and USA.  It was issued 1916 in USA. Apparently Campbell never followed up on it.

The list goes on and on. It seems like the patents that would be backed up by big companies “got the deal”. Fleming bitterly regretted that he sent his valve to Deforest a few years before Deforest applied for the patent. Armstrong never got a penny for his invention, despite companies such as Deforest, Western Electric, Bell labs, RCA and many others used his patents. The trials with Deforest and RCA went on and on for decades, and sucked all resources out of Armstrong  – Armstrong lost them all, despite no one has ever doubted that Armstrong was the original inventor. Armstrong committed suicide in 1954.

I will leave it to the historians to declare the worlds first audio amplifier.

The list I have worked out begins with Langmuir’s amplifier anno 1916.